It’s so cliche, but time really just flies by!  Jellybean is over a year old … and random question, but at what point do we stop saying our kid is X number of months old and just say how many year?!  I remember making a conscious decision to stop telling people how many weeks old she was and just say the month.  In part it was easier for me, but mainly because I felt bad making people do the math! Any-who…

Somehow over the last few months we’ve managed to identify even more baby gear essentials/favorites.  Seriously this little person’s stuff, who doesn’t even weight 20 lbs might I add, has somehow managed to literally take over our condo!!  We’ve even had to clear out the DVDs in the living room tv stand to make room for all of her books.  Honestly though, not complaining AT ALL that she’s already a little book worm!

If you are new to the baby essential series definitely check out our favorites for newborns, 3-5 months and 6-8 months. 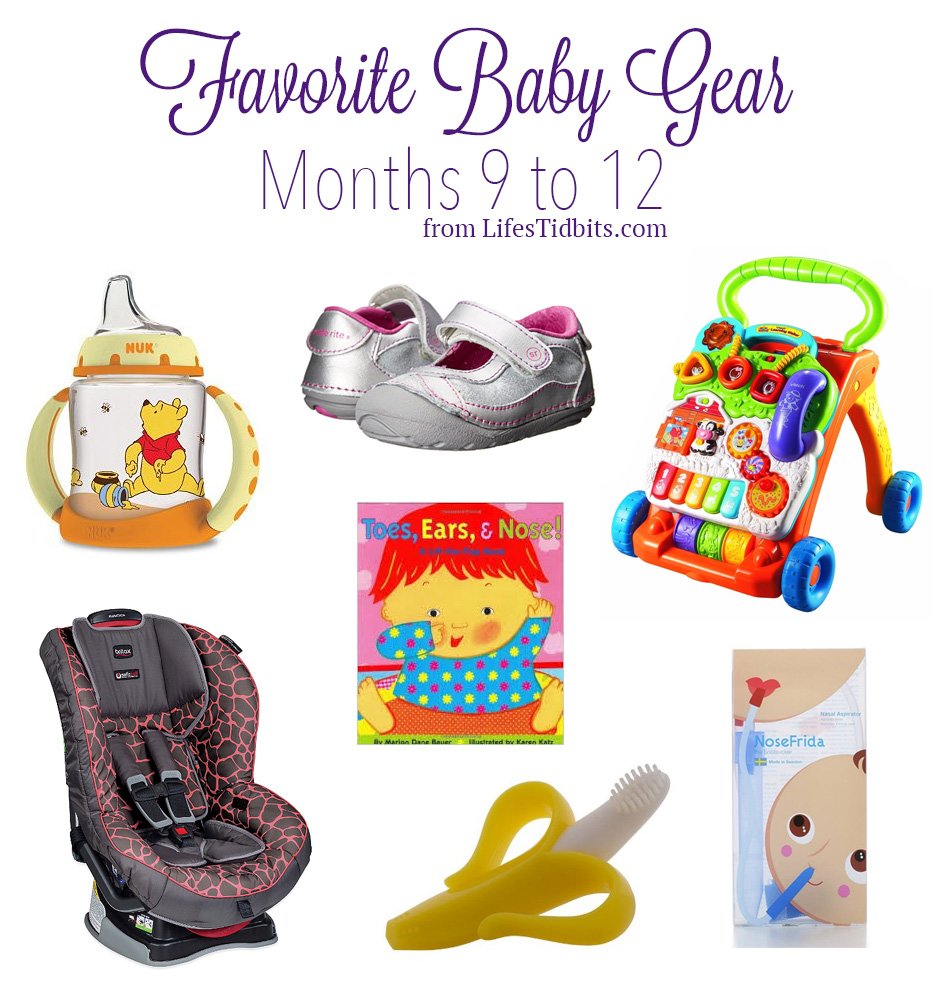 Nuk Sippy Cup // Doesn’t leak, which is hugely important.  Like many parents it took a few sippy cups to find the one Jellybean liked.

Stride Rite Shoes // These were gifted to us from Jellybean’s nanny share friend.  They are fabulous!  Easy to get on and have actual soles.  I found a lot of baby shoes don’t have real (rubber) soles on the shoes.  Jellybean wore through her first pair of shoes in just a couple of weeks.  These shoes have held up well considering the little lady is putting them to VERY good use.

Sit-to-Stand Learning Walker  // Jellybean always wants to be on the move.  Before she could walk on her own she tore around the house like a little bat out of hell on this thing!!  The toy attached to the walker is also a huge hit and great sensory toy.

Britax Marathon Car Seat // We made the transition out of the infant carseat to the ‘big girl’ carseat on the early side.  This was two fold … 1) I wanted a new stroller and the only way to financially justify it was to sell the old one with all the extras 2) Jellybean is tall for her age and I felt like her legs were just too long for the infant seat.  This car seat got rave reviews online and from friends.  It was an easy choice for us!

// Jellybean loves ALL books, but peak-a-boo and flap books (think interactive) are just about the best thing in her world.  She points to where ever the book is and say ‘more, more, more’ until you fetch the book, sit down and read it to her … endlessly!  LOL

// Great for making good habits AND she had 8 teeth prior to her first birthday!  A little dental cleaning was and is in order.

NoseFrida // Jellybean came down with her first cold … queue theme song from Jaws {or whatever else sounds scary}.  While it’s bound to happen at some point during the little ones 1st year there isn’t a parent out there that wouldn’t do just about ANYTHING to relieve their pumpkin’s symptoms.  The NoseFrida is amazing at providing sed relief.  That is assuming you can actually use it on your kiddo.  If your child is anything like mine it takes two parents to ‘administer’ the NoseFrida, however it was well worth the struggle.