A couple of weekends ago I took off my mommy hat and put on my ‘adult’ pants for my oldest friend’s bachelorette party!!  My family and friends were joking that I would be calling it a night around 11pm, however I am happy to report I stayed out dancing with my friends until 2am … sometimes I really do surprise myself!  As I’ve gotten older I have become more into going out to dinner than a going out clubbing or to a bar, but once in a while it is definitely fun to let loose and have a late night.  And lucky for me, my husband was kind enough to handle baby duty for the whole evening and the next morning so I could get some sleep.

As the bridesmaids and I started to brainstorm for the bachelorette party I took to Pinterst (obviously) to see what ideas were out there.  First I checked out my Fling Before the Ring board to see what I previously pinned and I immediately found something that triggered an idea.  For my bachelorette, my maid of honor had put together little goodie bags for each girl.  I loved the idea and wanted to do something similar.  Enter the badass bachlorette survival kit inspiration, which can be found here. 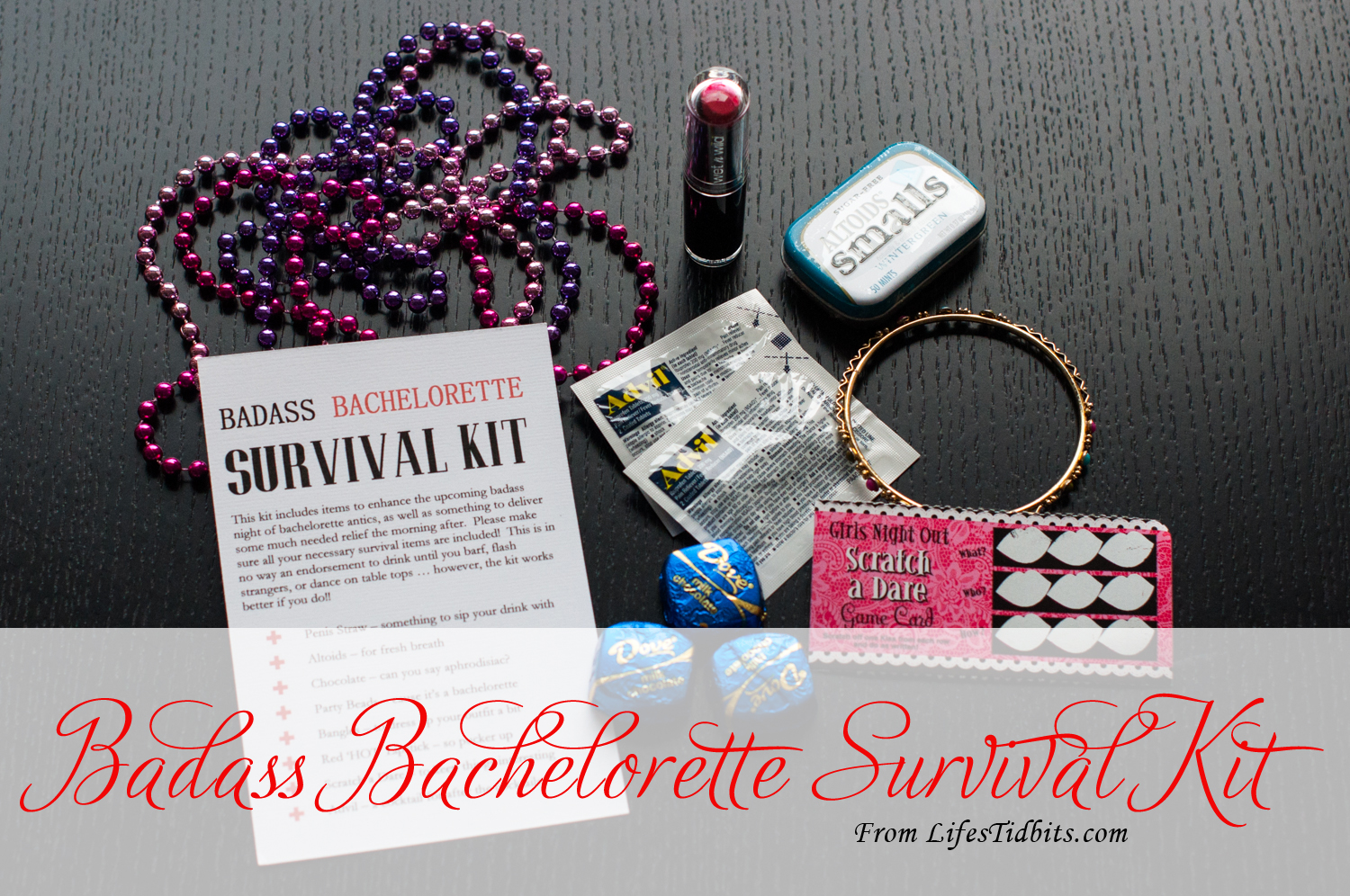 It took us a little while to determine what should go in each bag.  In the end each survival kit included: 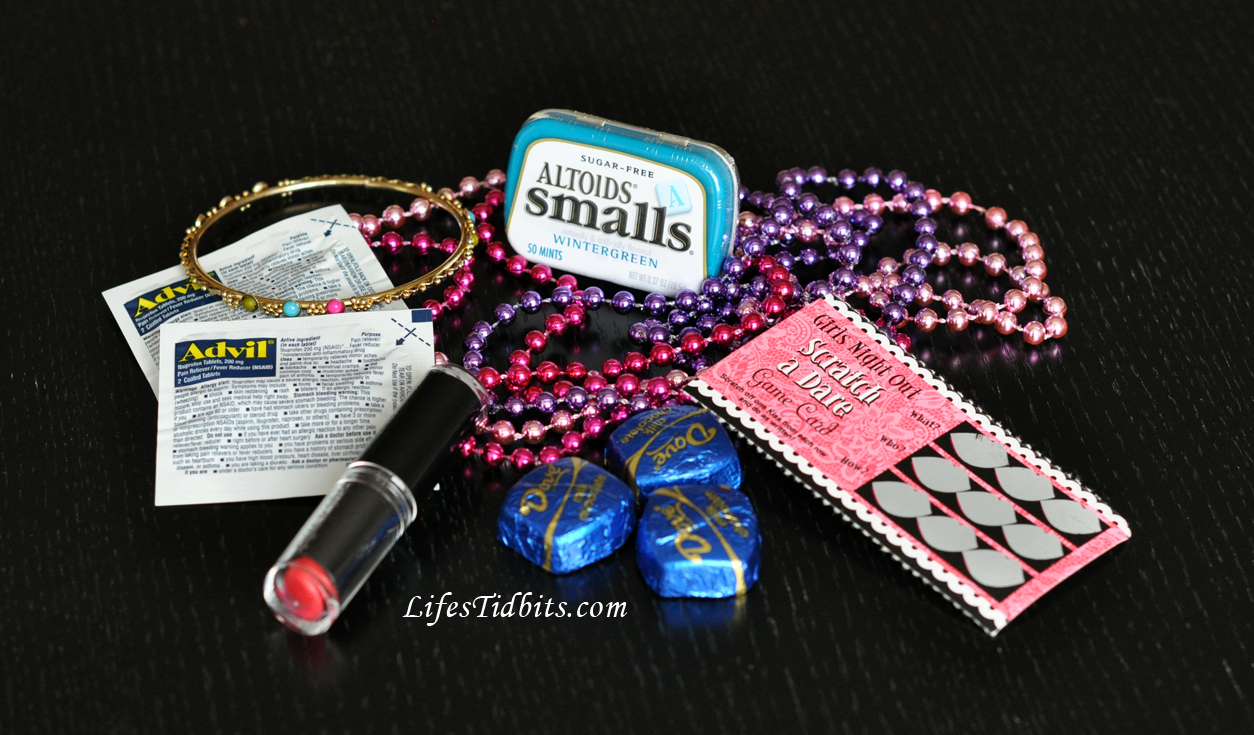 Originally, I had intended to print everyone’s names on the front of the bags and ‘Badass Bachelorette Survival Kit’ on the other side, however the printer and the bags didn’t get along well.  Hand writing everything on the bags would have been a possibility if I had nice hand writing.  Overall I am really happy with how the survival kits came out.  I think the bride-to-be and her possy put the kits to good use!! =) 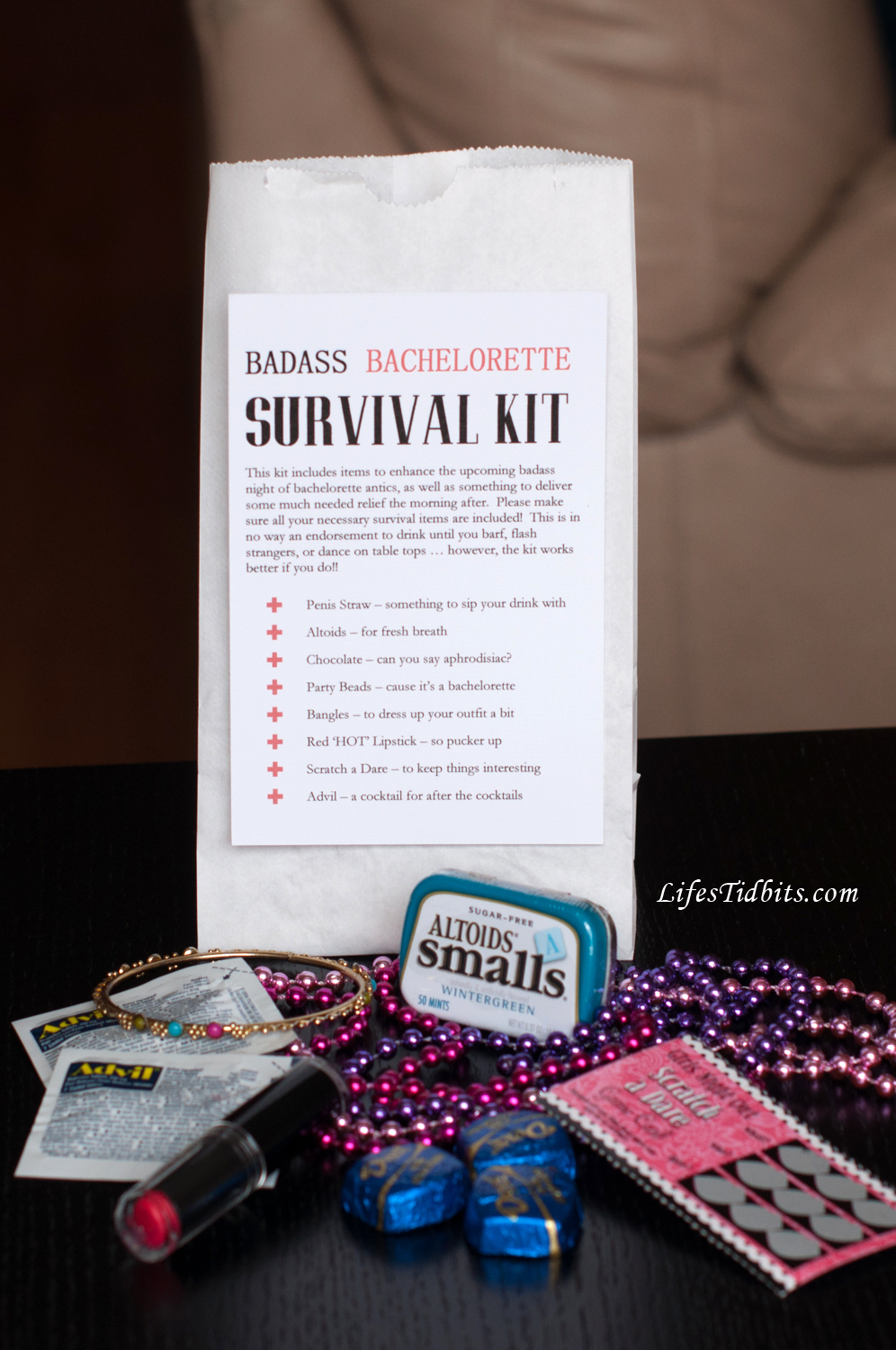 FREE Badass Bachelorette Printable can be downloaded here.  I have uploaded the MS Word version so you can add/remove survival kit items as needed.  I really get bummed out when I find a fabulous printable and then can’t use it because it’s un-editable.  You will need to download two free fonts for this printable:  Pottery Barn and FangSong.  I purchased 4×6 Cardstock to print the survival kit message on.

Did you do bachelorette party favors or survival kits?  If so, what did you include in the bags?

I struggled with if I should call it a baby welcome basket or baby shower basket.  Since I got the basket as a welcome gift for Jellybean, welcome basket won out!  A friend of mine reached out shortly after Jellybean was born and asked if she could come meet the baby.  She texted on her way and offered to bring us Starbucks, which I happily took her up on.  Not going to lie, the husband and I were pretty excited about having lattes delivered to the house!  When my friend and her husband arrived they not old had Starbucks, but also a gift basket for the little one AND some much needed sustenance (soup and cupcakes) for the husband and me.  Talk about thoughtful!!

Being new parents with little to no time to cook for ourselves we quickly ate devoured the cupcakes and soup.  Truth is, we totally had cupcakes for breakfast a few days in a row … when you had a newborn you eat what’s available, plus those cupcakes were DA BOMB!  It didn’t dawn one me until after they were gone to blog about the food and gift basket.  C’est la vie – the welcome basket is really what I want to show you anyways. 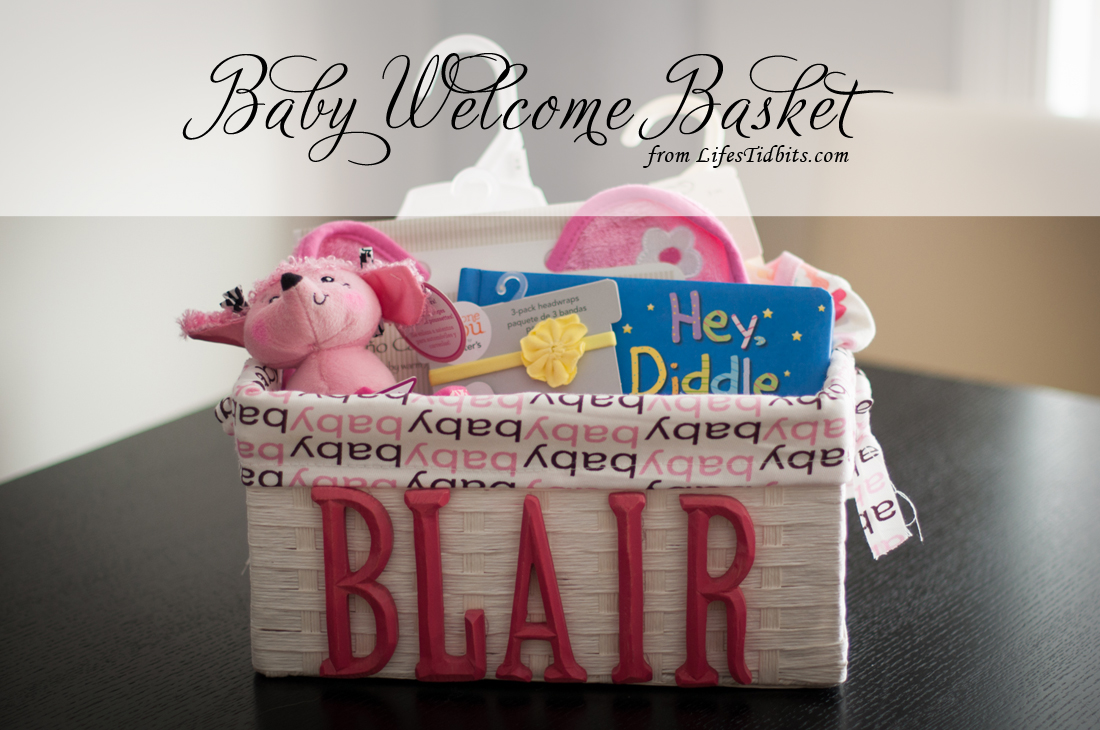 This gift is both unique as well as personalized!  I just love it and we’ve used everything in the basket with the exception of one item that doesn’t fit Jellybean quite yet.  The pink dog is a huge hit not only with my daughter, but the little girl next door who is a few months older is pretty into it as well.  The contents of the basket included: 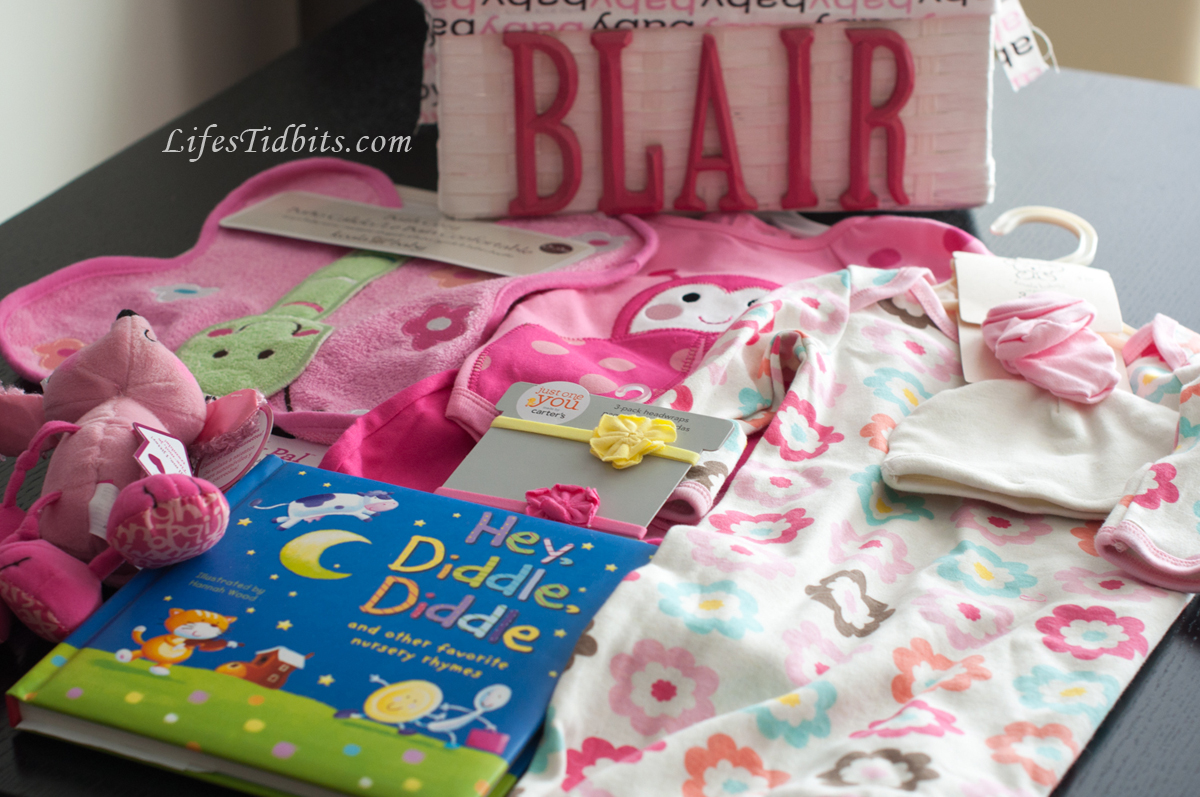 Soooo fabulous, right?!  I can’t wait to copy my friend’s idea and create a welcome basket for someone’s new bundle of joy … as copying is the highest form of flattery!  Since my friend is kind of known for creating these baskets I certainly don’t plan on stealing her thunder, so I am going to have to hold off under a non-mutual friend has a baby.  :)

Have you created a welcome basket for your friend’s new baby before?  If so, what did you include in it?

It’s Freebie Friday!  I know, I know, usually it’s Photo Friday.  Honestly, I just couldn’t find a photo I was excited about this week.  Figured it was better to switch it up than share a picture that was just meh.  Back in February I shared all the details from my friend’s Little Man / Mustache baby shower.  One of my favorite details was the chocolate mustache party favor tags: 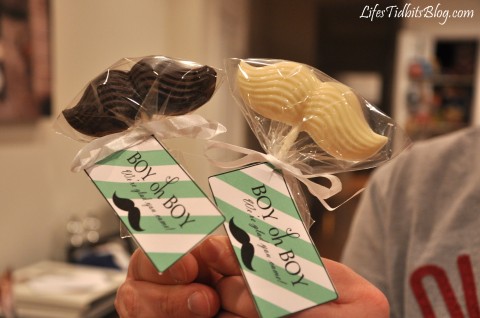 The tags were one of the DIY projects I did for the shower: 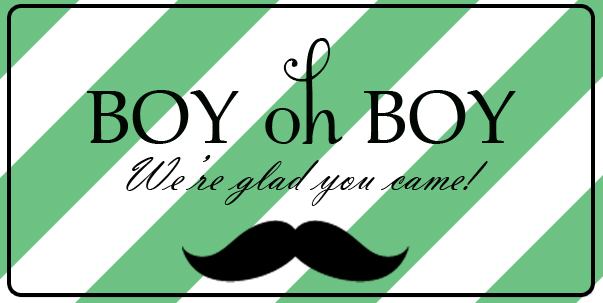 The chocolate mustache party favors were displayed during the party and added an extra bit of decoration!  Double duty items are never a bad thing, right? 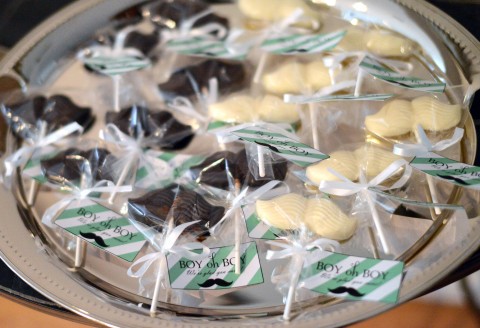 Get the FREE printable here.

Happy Friday! Have a fabulous weekend.

With chocolate mustaches as the baby shower favor completed all I needed was to make the favor tags.  I ordered card stock to print the tags on and started designing them in PhotoShop.  I wanted the design of the tags to be similar to the custom invitations I made so the “paper products” would mesh.

After cutting all the tags down to size using my favorite paper cutter I compiled everything I needed on the kitchen table.

With scissors I cut a small slit in the upper left corner of the tags and threaded the ribbon through.  The the husband got to play assistant and hold the favor bags as I tied the ribbon/tag on each mustache lollipop.

The husband and I thought it would be fun to try out one of the extra mustaches on Sophi.  She was desperately trying to lick the chocolate while we photographed her.  Doesn’t she just look adorbs with her ‘stache?!?!